I have to admit, as far as Mondays go, my 24th of March was pretty fantastic! I had been lucky enough to attend the 2014 CHA Independents Day. Every year, the Cookshop & Housewares Association organise a day for independent retailers to come together and get first-hand experience of new and popular products for Cookshop staff. Myself and Hannah were there flying the flag for Philip Morris and Son. 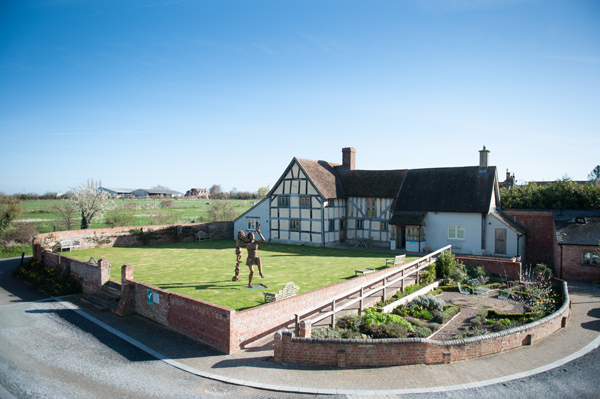 The event was held at the impressive Eckington Manor (above), I kid you not it is exquisit there. The grounds are pretty, unique and serene, a working farm made up of mediaeval architecture, luxury accommodation, rolling fields, a fine dining restaurant and a delightful cookery school. As soon as we entered the acclaimed cookery classroom I could do nothing to restrain drooling over the ever-so attractive AGA’s and cooking stations; I felt like I was in an episode of the Great British Bake Off!

I didn’t get around to viewing the accommodation there, but other attendees who stayed the night before were raving about it; there were even rumours about hand embroidered silk wallpaper in one of the rooms – Oh. My. Gosh! You could genuinely tell that the people who ran Eckington Manor were unbelievably passionate about what they were doing there. A strong ethos about using fresh, local – if not homegrown – produce was apparent throughout the day, and as a group of independent retailers it was easy to relate to the significance of shopping local. You could practically feel the love poured into the restored buildings, the picturesque orchard and the delectable vegetable and herb gardens. The members of staff who helped us in the cookery classroom were second to none, friendly, approachable and very well humoured! 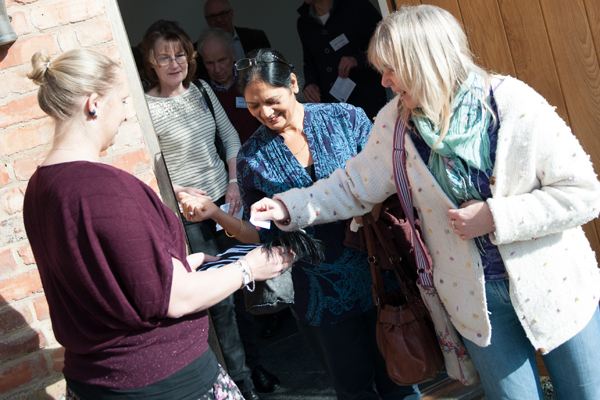 Thankfully, upon arrival we were welcomed by tea, coffee and biscuits – what better way to start a morning? Then we randomly chose our groups from a rather funky – some may say garish – zebra striped hat (above) with feathers adorned to the rim. We had our suspicions that this was Martin Davison’s from Meyer! I was team 6 with Katie and Sarah, here we are (below), I’m pulling a stupid face as usual; a frequent occurrence and the reason why there are only about three pictures of me from the whole day, to which my boss asked if I was even there! 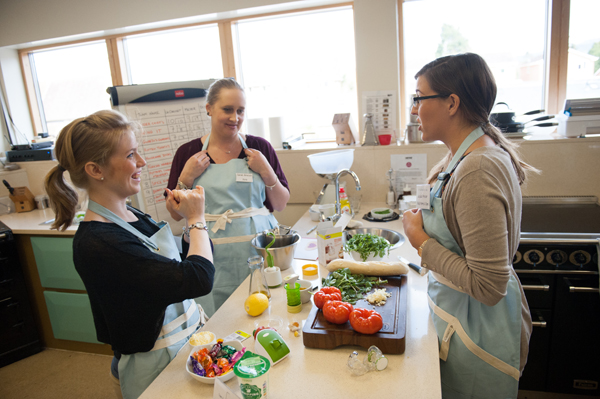 This year focused on ‘Foods from around the World’, so, after Katie, Sarah and I decided on naming our team ‘Forking Marvellous’, we started the day with a demonstration from a lovely lady from Le Creuset who was exhibiting the World Cuisine range. Luckily for me, team 6 were located at the front bench. This meant I could watch the demonstrator intently, thus catering to my absurdly over-competitive nature, which was thankfully rivalled by the rest of my team members!

World Cuisine is a new collection of products that pay tribute to some of the most inspiring and exhilarating (often spicy!) cuisines from around the world. We had the pleasure of using the Cast Iron Balti dish to create a succulent, party-in-my-mouth Lamb Balti – I even stashed some away to have for my tea, and it tasted even better – which I didn’t think to be possible! For some ridiculous reason unknown to me, as I thought it was the best Balti I had ever tasted, we only got an 8/10. Some spiel about the texture not quite being right… pffft!

The next dish makes me go weak at the knees just thinking about it, *wipes drool off keyboard*! The Meyer Group were in promoting the new Raymond Blanc Kitchenware Range – this, for me, was exhilarating as I absolutely adore the Brasserie Blanc restaurants, only on special occasions mind you! Anyway, Linda Jones and her sidekick Martin Davison were showing us French cooking at its best, with Steak Maman Blanc sautéed potatoes and blanched Green Beans… Unquestionably, this is my ‘hypothetical dooms-day-meal’!

It was delightfully delectable and ridiculously rich (in a good way); but, completely calorific considering the recipe involved using an artery-blocking amount of butter, but it’s not as if you’d eat it every day, so who cares? Plus, I was reliably informed that it’s still pretty darn tasty even without the heaps of butter. This time around, our dish was rightfully awarded 10/10 (said while dismissing a piece of humble pie!). We also got an extra point and some sweets, for being the cleanest team… Forking Marvellous were back in the race! 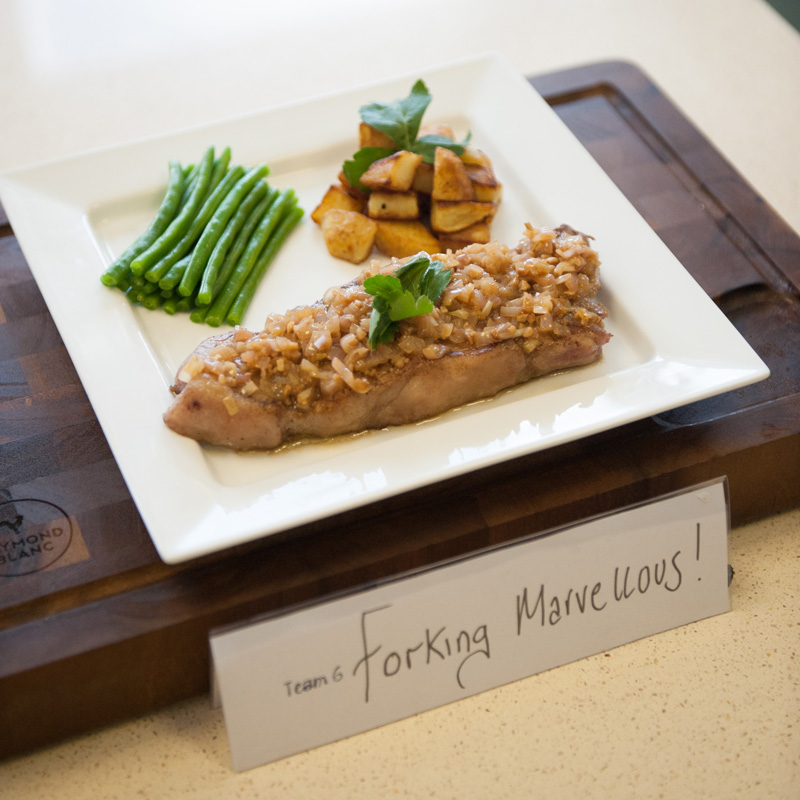 Don’t even get me started on lunch – Indescribably incredible. Bearing in mind we definitely didn’t need any after unashamedly wolfing down the Steak Maman Blanc!

Practically rolling back into the classroom after lunch, it seemed our prayers had been answered when the next dish was an Italian salad! This time, David Alvarez of Chef’n and Roger Morgan-Grenville of Dexam were showing us nifty gadgets from their popular brand Chef’n, which specialises in fun, novelty ways of overcoming objections in the kitchen. For example, there was a handy little garlic chopper that involved very little effort except for rolling the mechanism across the table back and forth; an easy-peasy Hullster Tomato Corer, and the Buttercup – a butter maker that simply required you to pour whipping cream in the clever contraption, shake for about 3-4 minutes, tip out the buttermilk and voila – beautiful buttery goodness! 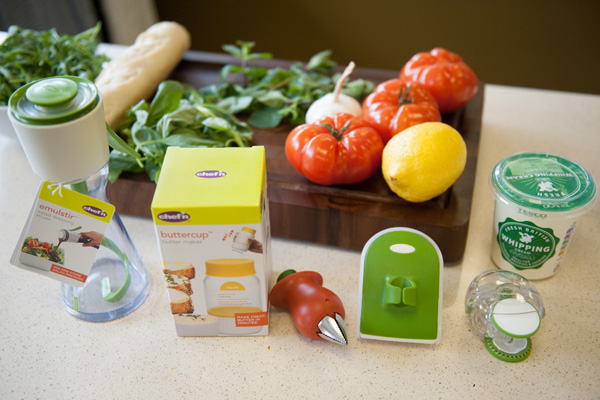 While making the salad, we were a team member down for a little bit while Sarah, the allocated first-aider (and Mum of our group), attended to a herb-cutter/thumb emergency that resulted in five stitches – ouch! I must admit, Katie and I were a little lost for that long ten minutes without our adopted group mother, but we knew she was needed elsewhere! Even though we were incredibly inventive with our salad design concept, by scooping out the HUGE (locally grown) tomatoes and serving our salad inside them, we were once again cheated of victory and given a measly 7/10…Outrageous! 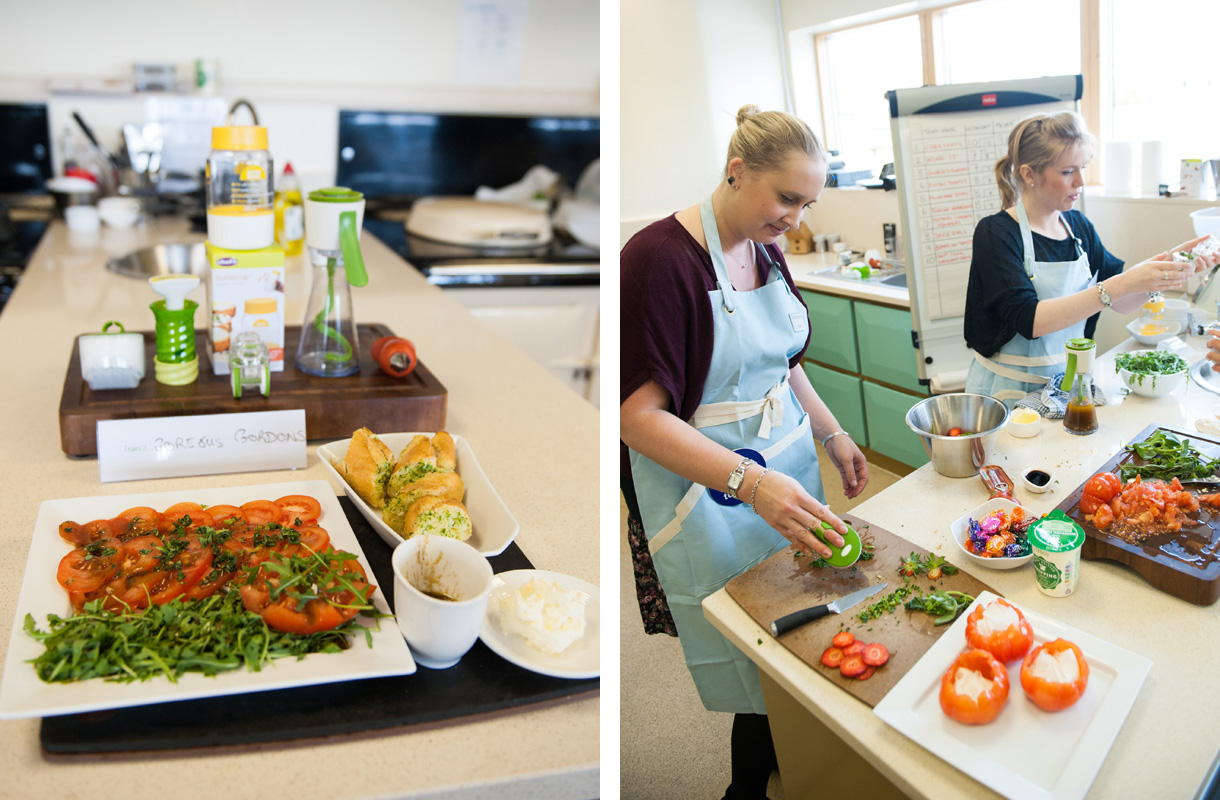 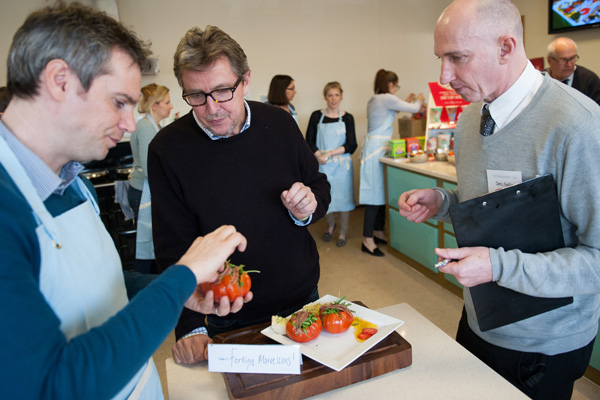 Last but not least, George East joined us with charming young Indian designer, Jasleen Kaur. Glaswegian Jasleen was inspiringly passionate, not only about Indian cooking but also her design. Her humble, charismatic and light-hearted way of presenting the product, made for an appealing demonstration. 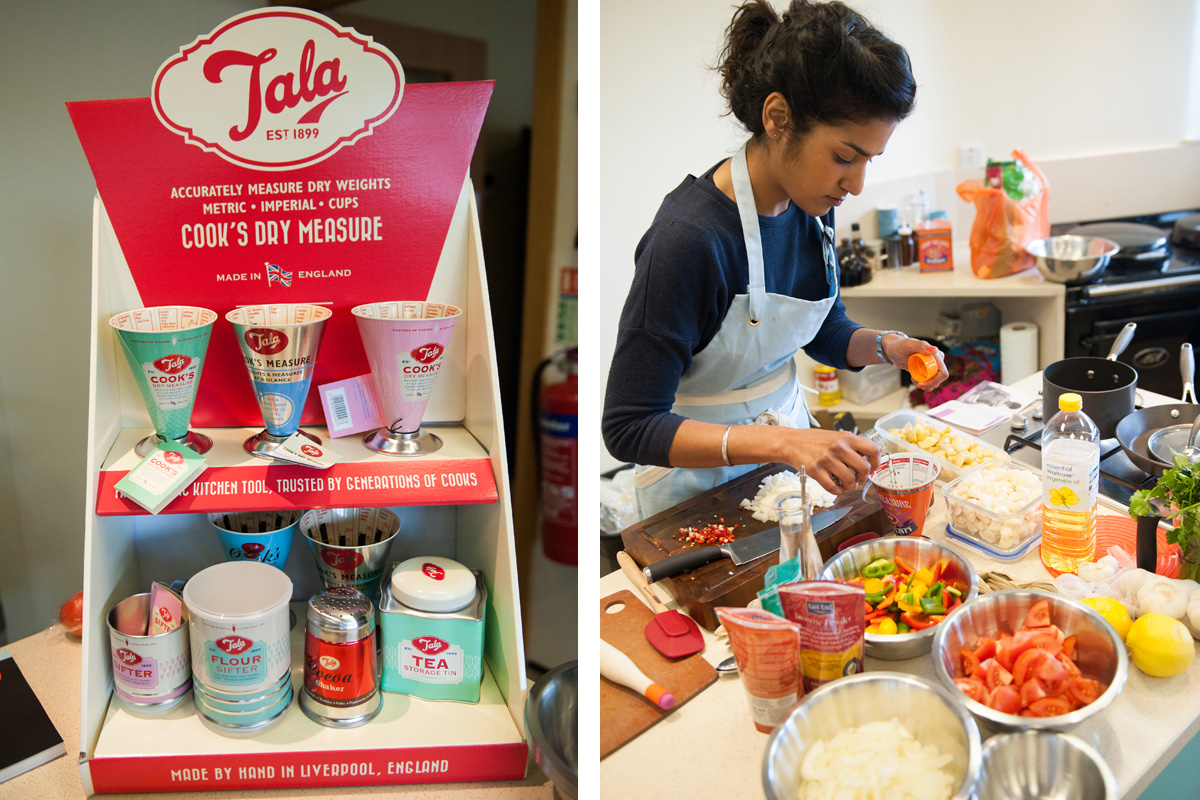 After using the traditional Tala cook’s measure for years (a measuring cup which offers weights and measures at a glance – the inside is labelled with ingredients for common dishes), Jasleen came up with the concept of adapting it to suit Indian cuisine, and so the Tala Thali Curry Measure was born. An ingenious idea that is handy in the kitchen and makes for a brilliant present for lovers of Indian food, aspecially as Indian dishes can often involve complex and challenging recipes. So, with the help of this simple yet innovative tool, we made a trouble-free Chicken Jalfrezi, and it was delicious! We found out pretty early on, by interrogating Chris (one of the judges), that he was not a spice enthusiast, so we omitted the chilli seeds. What? There’s nothing wrong with a bit of tactical cooking! 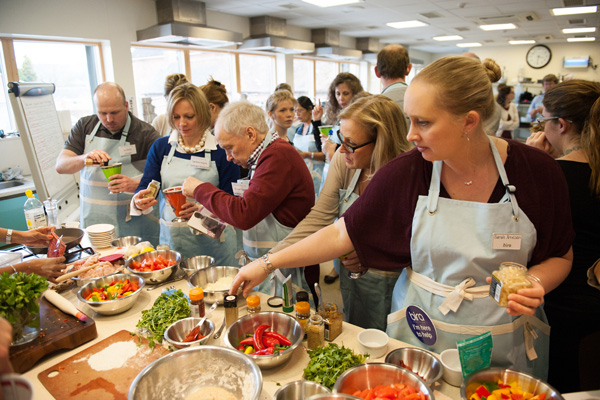 We also all had one team member go up to the front and attempt to make chapattis. After it was decided, without my knowledge, that the representative from our group would be me, I rose to the challenge! Refusing that humble pie just the once more, I have to admit, my chapatti was pretty round and it puffed up a treat– signs of a good chapatti apparently! Everyone was pretty good at them actually, thanks to the little chapatti tools it was made extremely easy. However, yet again we failed to reach the magic, golden number 10, and were lumbered with an inadequate 8/10! 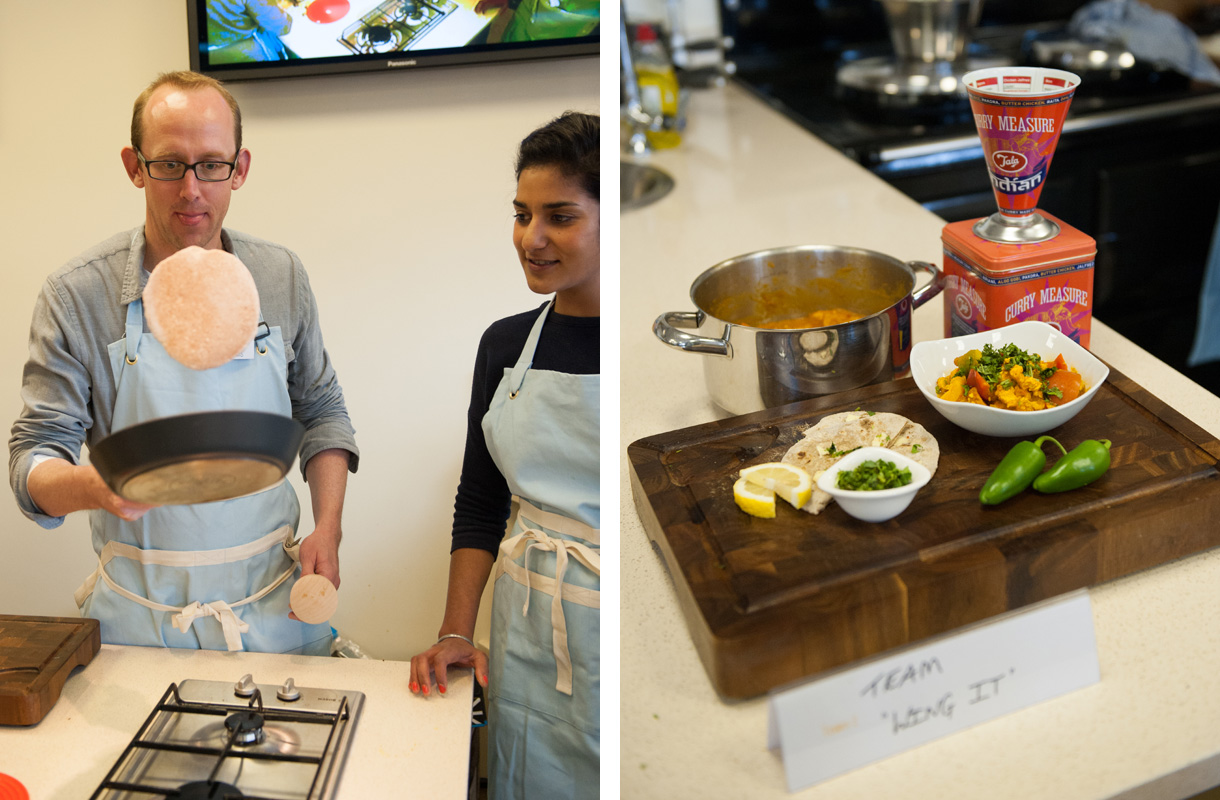 Do not fret, there is light at the end of the tunnel… To top off one of my favourite events I’ve been to (despite the questionable scoring), I was then awarded a Le Creuset Mexican Sizzle Platter for being one of two ‘best delegates’ for the day. Awww! What can I say, the team brought out the best in me! Here we are after being presented with our amazing goodies… 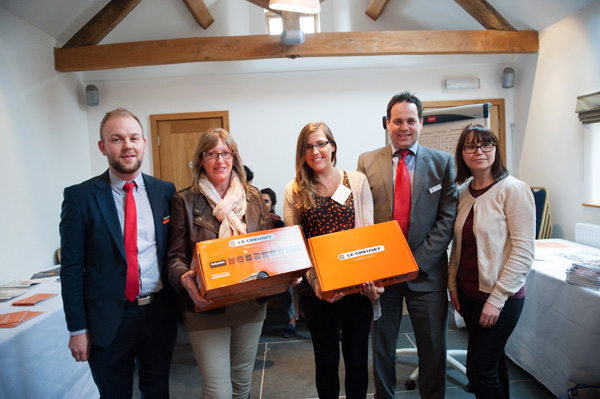 Congratulations to the Spice Girls (below), Victoria Beckham politely declined to be in the picture, for winning the overall day. We hope the champagne bubbles aren’t too bitter, although not nearly as bitter as me! Only joking, I’m not really THAT competitive, their steady stream of 9’s & 10’s deservedly made them the winners, followed closely by team Can’t Cook, Won’t Cook, who put up a pretty good fight! 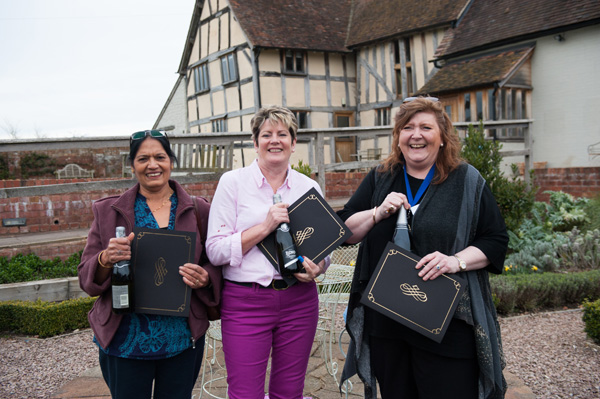 And  here we all are after a fantastic day of eating, chatting, cooking, using innovative products and more eating… 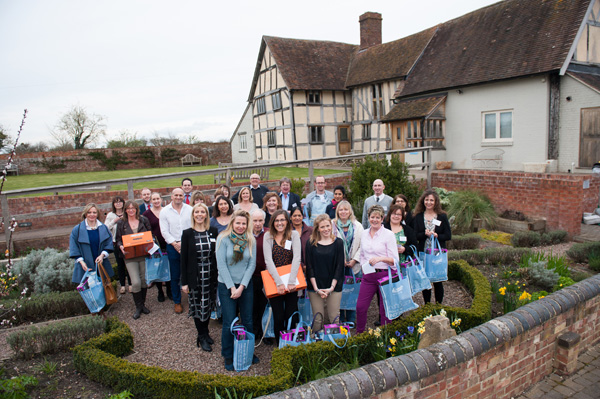 A huge thank you to the Cooking and Housewares Association and Bira for this brilliant day, and also to Le Creuset, Meyer, Dexham and George East for their involvement, time and contributions. I hope I’m fortunate enough to return next year…please?

I am the Manager of the Cookware department at Philip Morris and Son. I will be keeping an up to date journal of my personal experiences with the kitchen appliances that we sell. Here you will find useful information on how to use your kitchen equipment efficiently, along with very tasty (yet experimental) recipes.
View all posts by KarenT →